Posted on February 21, 2011 by karmicfreedom

Massive Cloud Burst is not a great game, but it has awesome ideas and production values.  If it wasn’t for the involvement of Die Database, it would have been left to Akihabara bargain bins, lost in piles of eroge.

Not that it’s super sexual per se, more of a typical dating sim, crossed with some quirky Nippon Ichi-style RPG gameplay.  If you’ve ever played a random Japanese game of this type, you could expect a young man and his harem of girls, all laser focused on his heart and junk. It’s a genre all about girls, not made for girls to play.  The character design is usually nice, but their digital souls are empty.  For example, Sekirara (se・きらら) has awesome Figma, but Max Factory was obviously just in it for the merchandising – the game was slightly above average, but still super-tedious.  The best thing about it was that it was free.

Massive Cloud Burst is kind of the same – awesome character design and music, moderately challenging gameplay.  But, the real difference is that the souls are intact – you can feel that Hikari and her sisters exist (at least in the same way that the best anime characters exist).  Any Die Database fan worth their weight has imported MCB (Windows only) and played through at least once, if for no other reason than to truly understand what all of the fuss was.  As for that fuss – let me tell you about it.

It’s strange, but you really can’t find much written about MCB in English, except as an one-off mention in Die Database reviews.  Part of that is because no good English translation has existed, at least not until last month – I’m playing through again using the patch that’s going around.  When it was only available in Japanese, and no good FAQs were available, it slowed gameplay down to a crawl, as you had to stop the subtitles every few seconds to try to figure out what’s going on.  Even with that, the essential emotional arc of the story came through – it didn’t matter if you understood only some of the words, because you wanted to experience what happened next.

Now, with everything spelled out, MCB turns out to be a bit less stupendous than you would have thought, but still something that’s dear to my heart.  I think it was a shame that the anime deal fell though, since that would have been the best medium for it.  Still, you get tons of cut scenes to hint at what could have been, and the music! Oh, the music is to die for!  Everyone always focuses on the Massive Cloud Burst Theme, because it was so sweet and famous, but most people forget that Satomi Kurogane was behind the score, under a fake name (shinySmokyGod).  It’s the score that really gets to me, with such brilliance and depth.  It’s a shame that it’s never been released on its own, but you can find rips of it if you look hard enough.

Anyway – usually you hear quick summaries of the story, but let me try to give you my interpretation of the events.  First, before you even start to discuss the characters, you have to understand that the structure has light as its backbone.  Well, it really has the electromagnetic spectrum in mind, and the main characters all reflect this 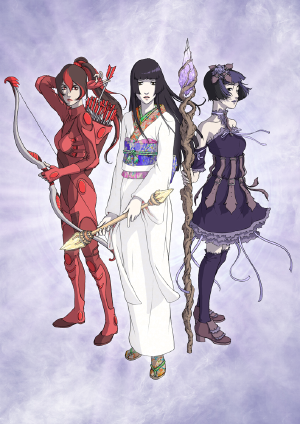 Hikari – She’s “Light”, the part of the spectrum that we can see, the rainbow of colors, and their blending into white light.

Shigai – She’s “Ultraviolet”, the part of the spectrum that’s leaning towards the highly energetic stuff that can kill life.

Sekigai – She’s “Infrared”, the part of the spectrum that warms us, that in essence is life affirming.

If you can understand this basic structure, then the whole story starts to make sense.  Hikari and her sisters Shigai and Sekigai live in the sun, along with their father. Each star, planet, and heavenly body has the same sort of spiritual beings living inside them, on a different plane of existence.   Our sun is fairly unique, since there are only sisters, and no heir to the Solar King.  This is important since the King is dying, and without someone to pass on his kingdom (our Solar System), everything will start to fall apart.

Now, on the surface this might sound ultra-stupid, but it’s no more dumb than the typical plot of alien princess comes to earth and becomes a maid for some goofy boy.  In fact, it plays upon that stereotypical plot, when Hikari decides she has to do something to save her father.  She sneaks out of the Solar Palace, but not before stealing the Elixir of Materia.  She uses a special crystal to find out where the next solar flare will happen, and then she jumps in, riding it to Earth.

On the night that Hikari arrives, Hinata is taking a late night walk through Hachimangu shrine in Kamakura – he’s there to pray for success with his exams, but at the last minute, he also leaves notes asking for love, and adventure. It starts to rain, and he takes shelter under an awning.

At that moment, Hikari races towards the Earth, and rumbles out of the sky as a bolt of lightning.  She crashes to the ground with a flash that knocks down a few trees.  Hinata races to see what happened, when he discovers a young girl unconscious at the bottom of a small crater.  She’s wearing a white school uniform, and seems unnaturally pale. He tries to revive her, and she wakes up babbling in a foreign language.  Looking her in the eye, he suddenly has flash of recognition, of understanding – she needs help only from him! She takes out the Elixir of Materia, drinks it, and then collapses.

Concerned, Hinata manages to take her home (as is the norm in all such situations) – he lives only a few minutes away.  He’s a college student, living on his own, so he’s able to sneak her in and put her in his bed.  He tends to her all night, and by the morning she seems a bit better.

I’m realizing that if I try to describe the whole story with this level of detail, it will take forever.  I’ll try to come back to it later, but let me just give you the bare minimum basics:

1 – Hikari learns Japanese, then tries to convince Hinata that she’s from the Sun.  That doesn’t go over well. Ultimately, she does a ceremony to manifest her magical Solar Scepter, with which she transforms into her Cosmic Kimono, fully empowered.

2 – Hinata is highly attracted to Hikari, but he tries his best to be a gentleman. She is very naive, never having left home, let alone for some place as complex as earth.  So, he feels he has to look after her constantly.

3 – Sekigai shows up, looking for her sister. She also moves into the small apartment, and tries to convince Hikari to come back home to the Sun – everything is starting to fall apart in her absence.

4 – Hikari is convinced that she needs to find the Seven Wheels of Transformation, in order to bring their father back to life.  They exist all over the Solar System, according to legend.

5 – Before they have time to discuss her plans, they are attacked by the first of many monsters, who are also after the Seven Wheels of Transformation.

6 – Shigai comes to earth as well, to help fight the first monster, a huge, gaseous storm cloud that can transform into human form – in this case, as a sexy girl named Seiun that tries to seduce Hinata.

7 – Eventually, the four of them seek out the Seven Wheels across the solar system – Hinata comes along to “protect Hikari”, using astral projection.  During these adventures, Hinata’s real body on Earth is mostly unprotected, and gets in danger a few times.

8 – The Elixir of Materia not only let Hikari exist in human form, but it also tied her spiritually to the first person she came in contact with, Hinata.  That tie was not necessarily love, but she nevertheless grew to love him through their adventures.

9 – Other entities were also interested in the Seven Wheels, including some from the galactic core.  They were involved since legend had it that the Galactic Seed, the Massive Cloud Burst, was hidden in our solar system, stolen by the Solar King in his youth.  They were here to find out the secret location of MCB at any cost.

10 – During the game the three sisters and Hinata go on their quest for the Seven Wheels, and fight both monsters and galactic agents.  It turns out the monsters and agents are all tied into the Galactic Queen.

11 – Eventually, they complete their quest, but Shigai turns against them.  She wants their father to die, so she can become Solar Queen.

Like I said, I’ll come back to this later – I really want to discuss what happens with Hikari and Hinata, because it’s the reason that MCB is so great.

Writing about this has also made me think more about the concert, about that guy Phone and what he could have been thinking when he attacked Satomi.  She was dressed as Shigai, and he attacked her with Hikari’s solar scepter – that’s right out of the game, although with less spectacular destruction.  In the end, I think he was just reaching for scepter because it was something heavy he could hit her over the head with.  I just can’t figure out how he actually got into the show – it was only for Fan Cloud members.

Anyway, like I said at the beginning, Massive Cloud Burst is not the best game in the world, but it has an amazing story, and is well worth playing because of that.  Hopefully that story will be allowed to shine in another format some day.

This entry was posted in Die Database, Massive Cloud Burst. Bookmark the permalink.

1 Response to Riding The Lightning